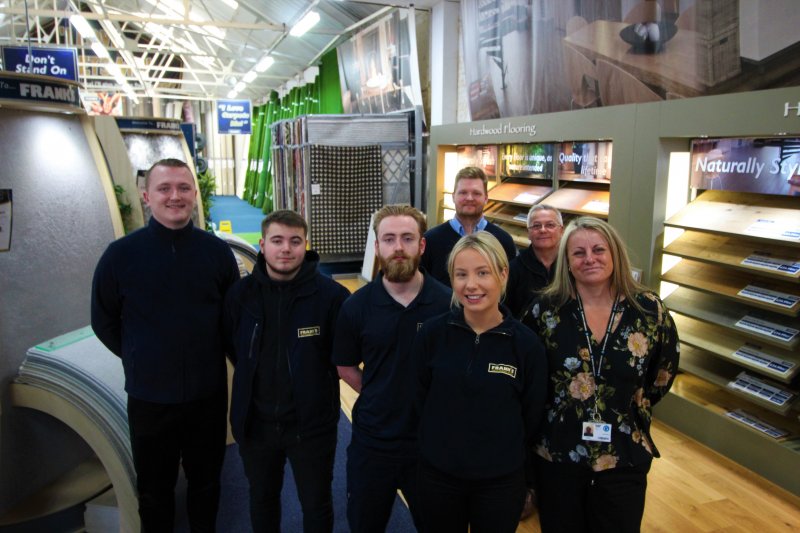 Gateshead College has joined forces with a well-known flooring retailer to provide apprenticeships for eight young people who are now well on their way to securing full-time jobs.

In 2019, Franks the Flooring Store re-launched its apprenticeship programme in association with the college.

The programme sees young people spending four days a week working in one of Frank’s network of retail stores in the North-East and another day spent at Gateshead College completing classroom-based learning.

Eight people are currently going through the 15-month programme, with several about to enter the final three months of independent assessments which should lead to them being offered full-time positions with Franks.

One of these apprentices is Kieran Cain, who has been working in Franks’ store on the St James Retail Park in Newcastle.

The 18-year-old said: “Learning about the different roles in store, combined with the teaching at Gateshead College, is providing me with the skills and experience I need to hopefully make a career in the flooring industry with Franks.”

Another apprentice is Ellie Walker, 17, who has been working in the Franks’ store in Consett.

She said: “Everyone has been so friendly during my time here and made me so welcome and I am now looking forward to completing my apprenticeship and hopefully gaining a full-time job with Frank’s.”

Matty Wright, 22, is doing his apprenticeship in the Franks’ store in Sunderland.

He said: “Sunderland is one of the largest stores in the group so that means I have done everything from working in the warehouse getting orders ready to go out, through to selling flooring on the shop floor. I have always told my manager that long-term I have set my sights on his job!”

Ross Sowerby, 20, is doing his apprenticeship in the Franks’ store in Ryhope.

He said: “It’s a small store so rather than being introduced to everything gradually, I was thrown in at the deep end and that’s been the best way to learn. I am already receiving and hitting sales targets, which is great.”

Mick Copeland, Franks the Flooring Store Business Development Manager, said: “Since re-launching the apprenticeship with the support of Gateshead College we’re delighted with the progress of the apprentices.

“All eight are set to have great careers with us at Franks and there’s no reason why they shouldn’t follow in the footsteps of previous apprentices who now work in senior roles within the company, including store managers.

“We’re so pleased with the success of the new programme that we’re now looking to introduce a rolling programme, with four apprentices joining us at a time, so we’re excited about playing our part in helping to create job opportunities across the North East.”

When they are at Gateshead College, the young people are working toward achieving a Retailer Standard Apprenticeship Level 2. Julie Kelly, Curriculum Operations Manager at Gateshead College, said: “The course covers everything from the retail environment through to marketing, sustainability, technology and legislation. The apprentices learn a lot about retail which they put into practise in the workplace.

“The goal is to provide them with the formal learning that helps to underpin the work-based learning elements, so they can develop and grow as individuals and employees.”