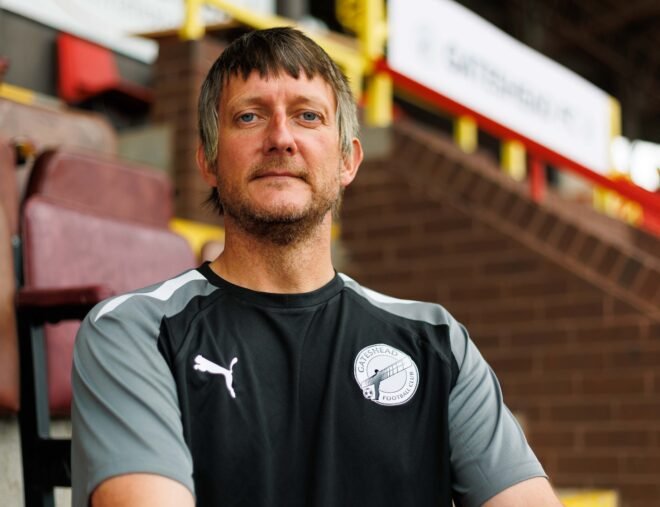 Ian Skinner has joined the college as the new women’s and men’s scholarship academy coach.

Ian who has vast experience in the sport and previously coached at clubs including Blyth AFC, Whitley Bay ‘A’ and Bedlington Terriers, will now lead the women’s team at Gateshead College as well as the Under 19s scholarship academy team in partnership with Gateshead Football Club. He’ll coach the two teams alongside his other current position as the manager of Ashington FC.

A qualified UEFA A level coach, Ian previously spent 6 years working on behalf of the County FA to develop both women’s and girl’s football in the North East region.

Ian takes over as coach of women’s team following an incredibly successful season which saw them win the treble; the college equivalent of the FA Cup, the Premier League and the Champions League, being crowned the Associations of College’s (AoC) League Champions and Premier Cup winners as well as winning the English College’s FA play off final.

In men’s football, the Under 19s scholarship academy team were crowned North Division champions in the National League Under 19 Youth Alliance and League Cup winners for the first time. The academy team is a partnership between the college and Gateshead FC where students play in the club’s Under 19s team whilst also studying for nationally recognised qualifications at the college.

Ian started his football coaching career as a Newcastle Academy coach and during his tenure managed five teams, helping them to progress and develop as players. Ian has also held positions as academy lead coach at Monkseaton Football Academy and head of participation at Northumberland FA.”

Ian Skinner said: “It’s an honour to become the new coach for Gateshead College’s women’s team and men’s elite teams too. I watched them closely last season and they were fantastic. I hope to build on that success, continue their development and take the teams to the next level.”

Tracy Foreman, Assistant Principal at the college said: “Ian has a wealth of coaching experience that will bring a new dimension to our women’s and elite football teams and it’s great to have him at the helm.

“The players we have are fantastic and under Ian’s direction, I’m looking forward to seeing them all improve further as players.”

Gateshead College is renowned for its footballing success for both men and women. Former Lioness, Jill Scott studied at the college before returning in 2008 to coach and mentor the Women’s Football Academy players on a part-time basis around her commitments with Everton Ladies and international duties.

Other top flight players who hail from the college include Euro winning player Demi Stokes and Chelsea goalkeeper Carly Telford.