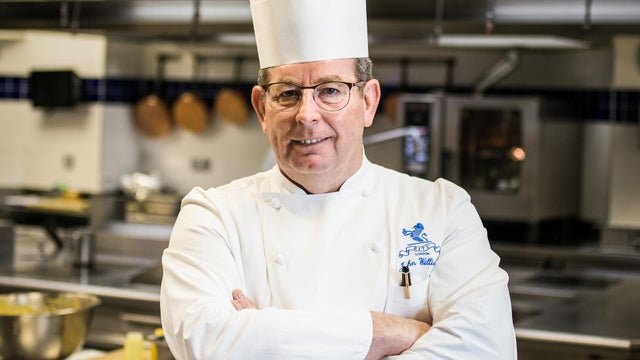 John Williams is Executive Head Chef at The Ritz London.

The Ritz London's Executive Head Chef John Williams has given catering students a taste of life as a top performing chef during a virtual talk.

John, who hails from South Shields, talked through his journey from peeling spuds in his Mother's kitchen to taking charge of the catering operations at one of the most prestigious hotels in the world and gaining a Michelin Star.

The students learned what a half-day might look like for someone working their way up in the kitchen; for example, John's half-days at the age of 27 were 12 hours long and his longest shifts would see him starting his day at 3.30am to source ingredients at market before putting in a full day and finally clocking off at midnight, or sometimes later.

He talked about his time at Claridges and serving the Queen and many more members of the Royal family, plus every US president for the past two decades.

The students were hooked listening to his stories of life as a fisherman's son in South Shields and how driven and dedicated he was to fulfilling his dream to becoming an executive head chef.

The students had a chance to ask John questions on his training and career.

Alistair Gilchrist, catering lead at Gateshead College said: "It was wonderful for John to give up his time to talk to the students. We've certainly got some students who'd like to follow in his footsteps and John's really been able to give them an understanding of the incredible amount of hard work that it takes to get to such a level, and the amazing accomplishments you can achieve if you do."